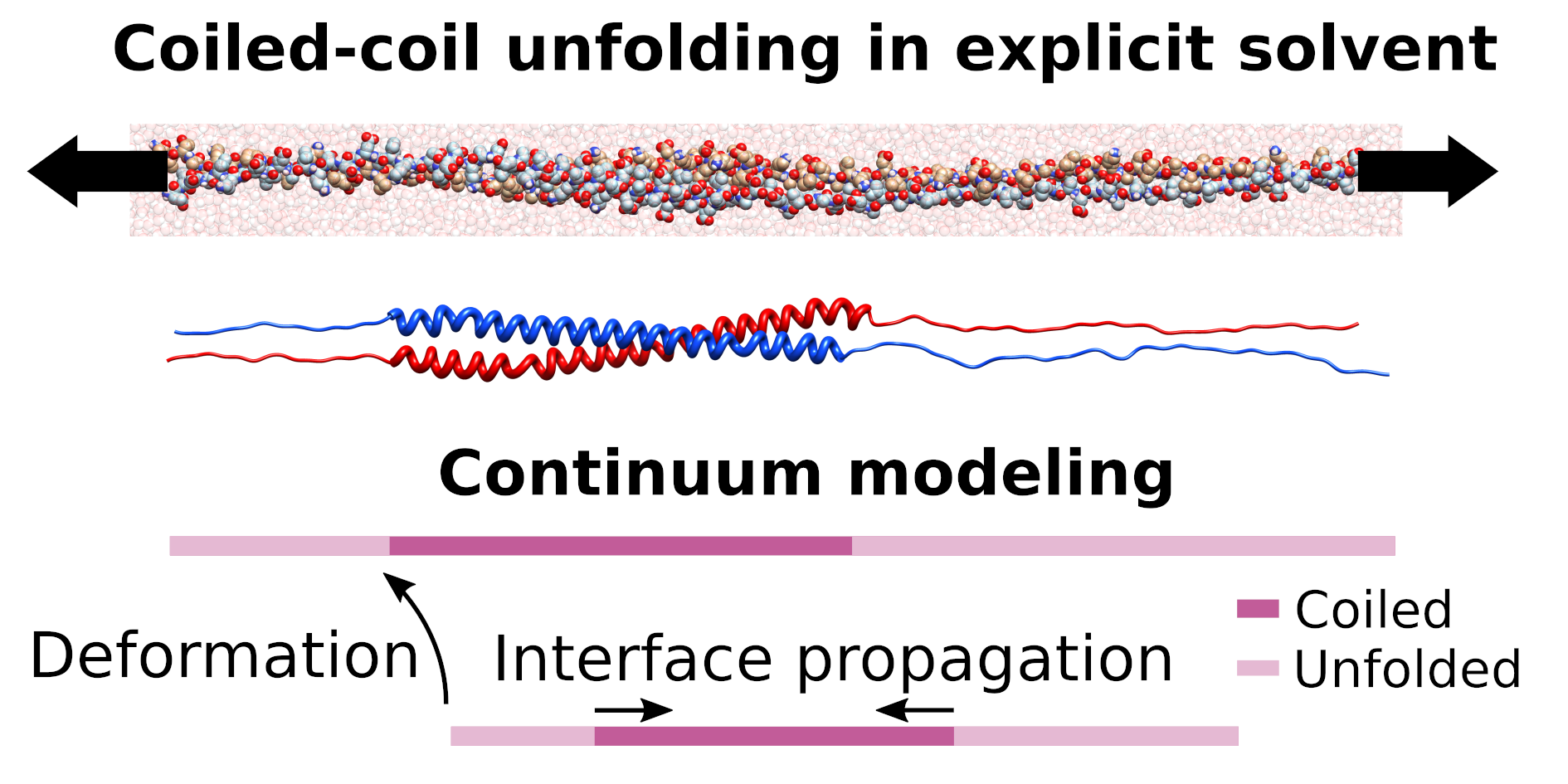 Coiled-coils are filamentous proteins that form the basic building block of important force-bearing cellular elements, such as intermediate filaments and myosin motors. In addition to their biological importance, coiled-coil proteins are increasingly used in new biomaterials including fibers, nanotubes, or hydrogels. Coiled-coils undergo a structural transition from an α-helical coil to an unfolded state upon extension, which allows them to sustain large strains and is critical for their biological function. By performing equilibrium and out-of-equilibrium all-atom molecular dynamics (MD) simulations of coiled-coils in explicit solvent, we show that two-state models based on Kramers’ or Bell’s theories fail to predict the rate of unfolding at high pulling rates. We further show that an atomistically informed continuum rod model accounting for phase transformations and for the hydrodynamic interactions with the solvent can reconcile two-state models with our MD results. Our results show that frictional forces, usually neglected in theories of fibrous protein unfolding, reduce the thermodynamic force acting on the interface, and thus control the dynamics of unfolding at different pulling rates. Our results may help interpret MD simulations at high pulling rates, and could be pertinent to cytoskeletal networks or protein-based artificial materials subjected to shocks or blasts.

Theoretical physicist working at the interface between physics and biology. Postdoc at @IBECBarcelona.

Our new review is published! With @XavierTrepat, in @TrendsCellBio A great thing to come back to from vacation.
It's on learning tissue mechanics from controlled building of #epithelialShapes, also by exploiting #cellDynamics. I hope you find it useful! #tweetorial https://twitter.com/XavierTrepat/status/1552673992061984769

Check out our review with @marija_matejcic on mechanobiological approaches to synthetic morphogenesis @TrendsCellBio. Free to read and download here:
https://authors.elsevier.com/a/1fSfq3QxxSnJDm
@IBECBarcelona

Check out our review with @marija_matejcic on mechanobiological approaches to synthetic morphogenesis @TrendsCellBio. Free to read and download here:
https://authors.elsevier.com/a/1fSfq3QxxSnJDm
@IBECBarcelona

Way to start a paper 🧙‍♀️

This symposium will gather renowned international researchers, as well as the scientific community from Barcelona and the rest of Spain.

💥The Symposium ‘Programmable Life’ kicks-off the Barcelona Collaboratorium for Modelling & Predictive Biology ➡️ This will be a new space for interaction of computational biology, AI and machine learning.